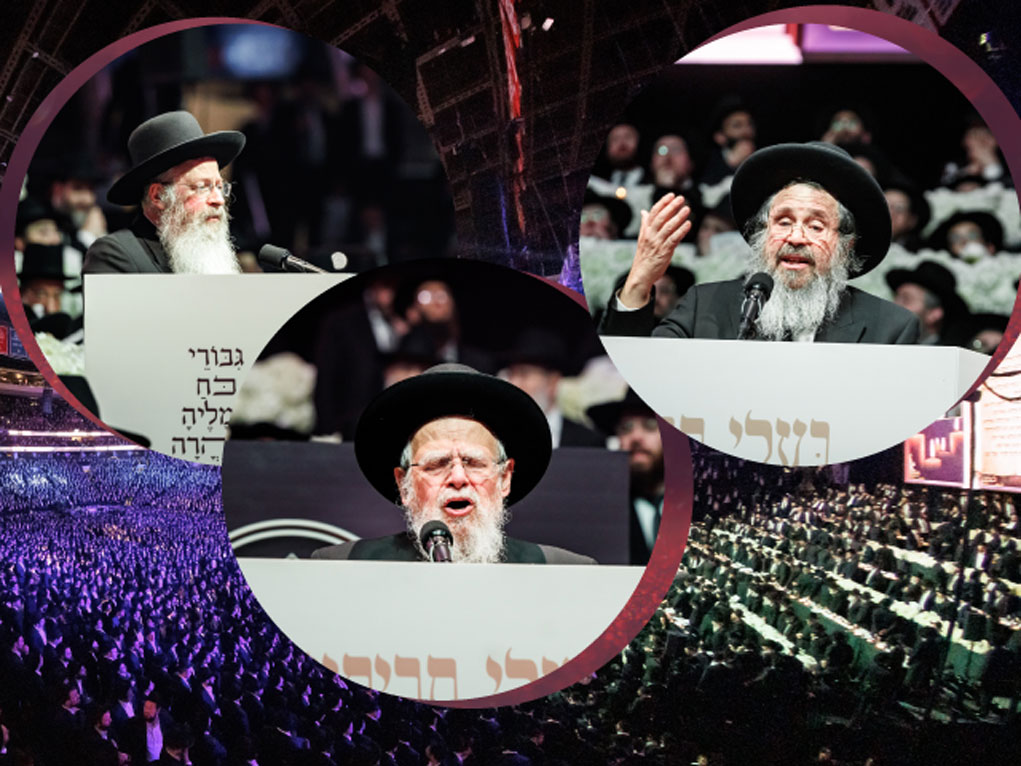 There is a certain part of me that did not want to write this article.  I simply felt that by describing any aspect of the awesome event that occurred on Sunday night in an official capacity, would transform me from someone who was a true part of the experience into an objective observer who was recording events. I as he experienced them.

I was neither.  I was not an observer.  As much as I am removed from the world of daily Kollel life for more than 30 years I still feel a part of that world not as an observer but as a participant. I live that world, everyone my chiladren live that world, and I pray that my grandchildren will live it as well.  Thus, in participating a celebration acknowledging the greatness of the Adirei HaTorah, I certainly cannot say that I was objective. I was passionately and fervently participating, listening, embracing and cherishing every moment of the inspiring event.  But the feelings could not be contained within my corporeal existence.  I felt that they should flow from my heart and my mind to the paper which you now read.  And thus, I will share the thoughts that I had upon leaving the arena, floating on the words of the great leaders and speakers who lifted me so high.

I cannot describe my feelings as I leave the asifa in honor of the Adirei HaTorah. Raw emotion is too weak a phrase. Awed emotion would be more fitting to describe the meld of reverence and veneration, esteem and wonder that permeated the Wells Fargo Arena this past Sunday evening. The celebration of Adirei HaTorah was larger than life in the scope of its mission and in its accomplishment, and I feel honored to have been there.

Of course, there have been stadiums filled with bnei Torah celebrating Torah accomplishments.  There have been arenas filled with participants paying homage to donors. But the nearly 30,000 people who filled every crevice of the Wells Fargo Center in Philadelphia did not come to celebrate an accomplishment. They did not come to praise a particular donor or even a set of donors. No names were mentioned. No institutions were lauded. No sponsors advertised. There were no logos, no placards, no corporate swag or magazines.

From my vantage point in the arena, it was hard to focus on anything but the sea of myriad men, all dressed in the distinguished attire of bnei Torah. I sat and gazed at the sight and recalled that the only other sight that had captured my awe was a miracle of creation – The Grand Canyon.

Yet this canyon, from the towering seats packed to the rafters down to the bottom of the bowl of the arena, was a canyon that conveyed a mystique that I had never seen. There were no sierra-colored rocks of green foliage or babbling brooks, but the beauty of the black and white of the massive crowd shouted with the joy and color of a thousand canyons.

It was numinous to see tens of thousands of people who were very diverse in the nuances of where life had led them, yet harmonious in their acclaim of the ideals they came to acclaim. There were some like myself, men who had once learned in Lakewood Yeshiva while Rav Shneur Kotler was still alive some 40 years ago. There were others like myself whose children and grandchildren were nurtured by the diverse Torah offerings of the yeshiva per se and the outgrowth of the community at large.

There were rabbeim, and roshei yeshiva, cheder and mesivta rabbeim, who may or may not have ever grasped a shtender in 617 6th Street, but their fealty to the cry of the rosh yeshiva zt”l resonates in their spirit. And so they came.

There were baalei batim whose emunas chachomim, part and parcel, cried out to them, “This is your credo! This is your belief! These are your heroes! This is our national mission! Cherish it! Laud it! Applaud it!”

I noticed some who spent their early married years in kollel along with me, but they, unlike me, never left the bais medrash. They are still toiling in kollel on the meager stipends that they were afforded through the blood, sweat and tears of all of those who understood that these are the men who sustain the Jewish nation. The recent herculean efforts that led to the doubling of those monies most certainly were a source of solace and strength to all the yungeleit. The strength was not from the money per se, but rather the understanding that a whole new era of tomchei Torah has emerged for whom the primacy of limud haTorah has become the central mission of their focus and import.

Although the drashos were powerful and earth-shattering, the messages that resonated from them, at least in my opinion, could not resound more powerfully than the essence of the asifa.  The displays of kavod haTorah, both for the roshei yeshiva of the center of Torah lishmah in America to the reverence afforded every single marbitz Torah from the dais to the audience, embodied the true spirit of the asifa.

Before attending, I was wondering about the reason for the asifa. Clearly, throughout the generations, Klal Yisroel has had its share of those who have learned Torah with ameilus to the highest level. There have been individual supporters of Torah, even groups of individuals who have bandied together to accomplish great missions in honor of the Torah.

Years ago, I remember a 19-year-old young man who was being treated for a terrible disease. Indeed, his friends gathered together for him and celebrated his departure from the hospital with divrei Torah, words of chizuk, even a professional singer, and, yes, a beautiful seudah. The young man may have been separated from his friends for a long while, but they came back, singing and dancing in his weakest moments to declare, “You are our true friend, and we will sing and dance with you to uplift your spirit and renew our loyalty!”

They were not doses of chemotherapy, and they may have not had a metaphysical effect on his actual recovery, but the chizuk he received in knowing that so many of his friends were supportive of him did miracles for his health and eventual recovery.

Although Torah is being learned all over the globe, the essence of bnei Torah and the purity of the concept of Torah lishmah are under attack across the world. Whether it is through the subtle nuances of society’s priorities or the snide inferences of those who echo the cries of apikorsim, who wonder, “Of what value are these kolleniks?” Torah is under siege.

The pervasive depravation of morality here in America and the constant undercurrent of disparagement in Eretz Yisroel have put the purity of Torah in a hospital-like setting.

It takes the true friends of Torah lishmah, boruch Hashem numbering in the tens of thousands, to lift its spirit and declare to the Torah, “We cherish you in your purity and honesty! We do not need the fluff of Madison Avenue or the promotions of falsehoods to appreciate your worth. You are our true friend, and we will sing and dance with you to uplift your spirit and renew our loyalty!”

It was not about individual people or individual accomplishments. It was a collective tribute to the amalei Torah and their supporters.

But what struck me most profoundly is that everyone who spoke, and the thrust of the entire evening was that they were not in one bit focused on honoring themselves, but rather what they do and the eternal vehicle that manifests the honor and glory of Hashem – learning Toraseinu Hakedosha and honoring all who bring the Torah to His earthly abode in every way in which that goal is manifest.

Indeed, I left with a sense of indescribable awe, feeling confident that the Adir Bamarom was most certainly pleased with the display of honor given to the Adirei HaTorah.