A World Without Rav Chaim 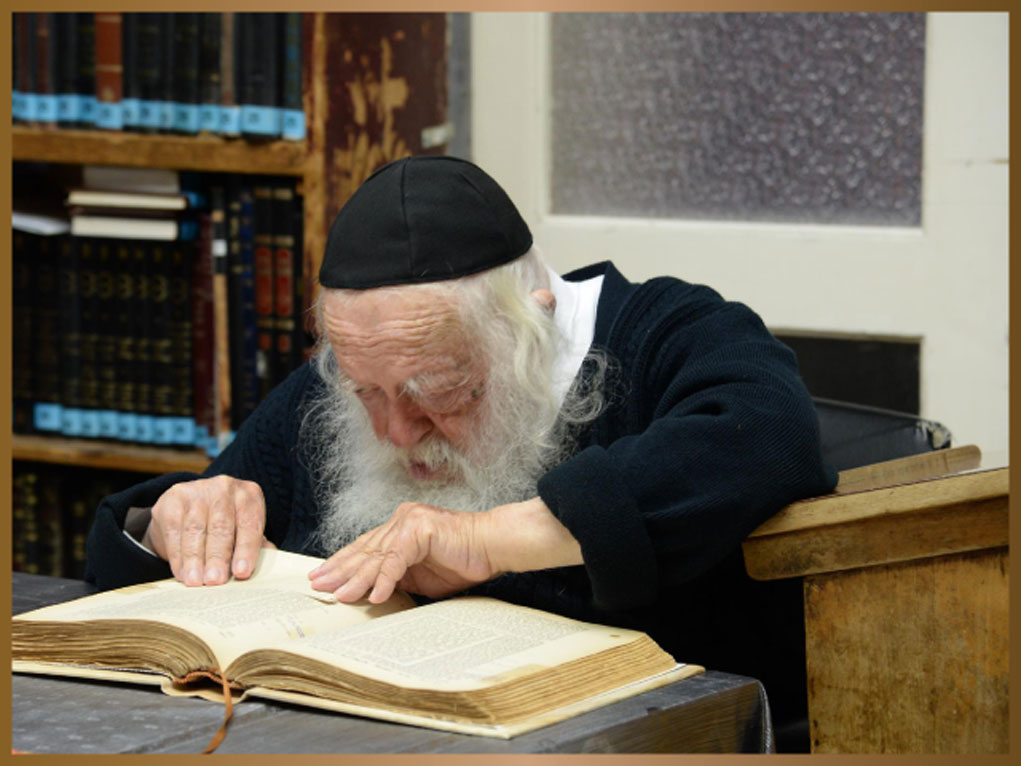 Based On A Vaad By Rav Elya Brudny

This has been quoted often, and we need to understand what is so profound in these words. Afilu sichas chulin shel talmidei chachomim tzrichim limud, because every nuance is so important. So, when a gadol of the magnitude of the Brisker Rov makes a statement like that, it warrants iyun to try to understand the intent.

Chazal teach us that it can take 40 years to understand daas rabo, and I think that the first time grasped the significance of the words of the Brisker Rov was when for the first time in the history of the yishuv of Bnei Brak that an enemy attack killed people in the city. It is obvious that Rav Chaim Kanievsky’s koach haTorah had protected the city until his passing.

Thirty years ago, when the Scuds were flying from Iraq to Eretz Yisroel, none of them impacted the city of Bnei Brak. Rav Chaim felt that bomb shelters were not needed at the time due to the koach haTorah in the city of the Chazon Ish. There has been much terrorism in Eretz Yisroel all through the years and Bnei Brak was spared. Then, just days following Rav Chaim’s passing, five people, including two ehrliche Yidden, were not spared. How do we understand this and how do we continue being protected?

Rav Simcha Zissel of Kelm delivered the following hesped on his father. The posuk in Yeshayah says, “Hatzaddik avad ve’ain ish sam al lev, ve’anshei chesed ne’esafim be’ain maven ki mipnei hara ne’esaf hatzaddik.” Rav Simcha Zissel points out that the concept of mipnei hara ne’esaf hatzaddik can have two interpretations, and in history we find both. It could refer to the tzaddik being removed to prevent an impending raah. A tzaddik protects a generation and misas tzaddikim is mechaper. On the other hand, it can mean the opposite. Hashem can remove the tzaddik to spare him the anguish of witnessing the impending calamity (see Rashi there regarding Avrohom). These seem to be two opposite approaches, and he said that both can be true, depending on how much we are sam al lev. If Klal Yisroel internalizes the misas hatzaddik – they understand the void that it leaves behind and engage in tikkunim to collectively fill the void – then mipnei hara ne’esaf hatzaddik is to avoid and prevent ra’ah. Misas tzaddikim is indeed mechaper. However, if, chas veshalom, it is ve’ain ish sam al lev, and we move on without it becoming life altering, then we squandered misas tzaddikim. The mipnei hara ne’esaf hatzaddik, then, is about the tzaddik being removed to prevent him from seeing the terrible impending calamity.

I believe that the Brisker Rov instinctively felt that someone in the generation needed to utter that we, Klal Yisroel were som al lev and internalized what happened. There was a world where the Chazon Ish was protecting, and the minute that he was taken from us it became a different world. By saying that one sentence, the Brisker Rov was motzie Klal Yisroel with the necessary simas lev, and that became the protection. Now that Klal Yisroel understood that it was a different world without the Chazon Ish, they were protected. Today, we need to internalize that it is a velt without Rav Chaim.

The Gemara in Moed Koton states, “Lama nismicha parshas misas Miriam l’parshas parah adumah? Lomar lecha mah parah adumah mechaperes af misosson shel tzaddikim mechaperes.” Why is this message taught to us specifically by parah adumah? There are many korbanos that possess the ability to be mechaper. In fact, compared to other korbanos, parah adumah is lower; it is not done in the Bais Hamikdosh and is considered just kodshei bedek habayis. However, parah adumah has a unique characteristic. After the seraifah of the korban, we take the aifer and add mayim to it, and then it is used for a taharah of shlishi and shvi’i to be metaheir a tamei meis, the biggest tumah that exists.

Perhaps this is why parah adumah is compared to misas tzaddikim. Unlike other korbanos, it doesn’t end with the hakravah. That is the beginning of a process that requires the hechsher of mei chatos. This is the analogy to misas tzaddikim. That, too, is a sereifah asher soraf Hashem, which needs to be followed by “va’acheichem kol bais Yisroel yivku es hasereifah asher soraf Hashem.” This yivku, like the taharah of the parah adumah, is a process of internalization that culminates in shlishi and shvi’I — shlosha libchi v’shivah l’hesped. This cleansing process builds on the sereifah to purify and internalize just like parah adumah.

This is our task now. We need to think about what a world without Rav Chaim represents, thereby ensuring our protection. This was an adam hagadol ba’anokim. There are gedolei olam who truly understand this. Rav Dov Landau in his hesped referred to Rav Chaim as a gaon and tzaddik from previous generations, who would have been considered an ateres and tiferes in those generations.

The challenge in internalizing this and what many of us feel is the following: Can we really fill the void? If the yam hagadol dried up, will my few water bottles really accomplish anything? Are we doomed to failure and a loss of protection? We must realize that Hashem loves us and certainly didn’t create a world for churban. Therefore, even if we survived over the past few decades in Rav Chaim’s zechus, the Ribono Shel Olam prepares a path forward.

When I was 14 years old and a young boy in Rav Avrohom Pam’s shiur, Rav Aharon Kotler was niftar. Everyone was devastated. How could we continue without Rav Aharon, they wondered. Soon after, Rav Yitzchok Hutner gave a long ma’amar. He began by quoting a Gemara, “shovak chaim lechol chai.” He explained that when gedolim depart, they leave a void, but it is a void to be filled. It is the collective avodah of those who remain to somehow fill this void. Gedolim are “shovak chaim lechol chai.” This is as true now as it was then.

It is amazing that even though Rav Chaim lived a private life in 23 Rechov Rashbam, so much was recorded. Thousands of pictures and videos are munach lakol. We were zoche that the Ribono Shel Olam sent us a demus from hundreds of years ago and it is all recorded with modern technology. How do we understand that the same technology that has caused so much destruction can also be used as an instrument for kedusha and Torah?

If you stop for a moment and think, there appears to be an unfair battle. The yeitzer hara has at his disposal the ability to make things look seductive and appealing. Through the glitter, instant gratification, and latest technologies, it is so easy to be pulled into the lowliness of olam hazeh.  The yeitzer tov, on the other hand, only has raw intellect and common sense. Is this a fair battle?

Rav Elya Lopian resolves this by quoting the Gemara which states, “Im paga boch menuval zeh moshcheihu l’bais hamedrash.” If one truly experiences the geshmak of learning, then he can resist the yeitzer hara. The emotional tug of “mesukim midvash venofes tzufim” is the great equalizer to the emotional pull of the yeitzer hara. However, this approach can only work for those who have truly experienced the bais medrash. Most of us can easily get caught up in the enticements of the yeitzer hara far before experiencing the geshmak of Torah.

It is in this light that we can understand how Hashem allowed all of this footage to happen. As much as there are videos and pictures of beautiful hotels in Mexico and Dubai, zeh le’umas zeh asah Elokim. We can now all easily view a small room on Rechov Rashbam where a Yid sits with his seforim and has all the joys of the world. Find me one person in the most exotic vacation places or any of the kosher hotels who has even a fraction of the joy of life. We can all experience this from the videos and this is the great equalizer. When we view this, we can imagine how Rav Akiva Eiger, the Ketzos, and all of our great gedolim were the same. Ashrei ayin ra’asa eileh halo l’mishma ozen daavo nafsheinu. This is our maareh kohein! Try looking at one of these many videos. See how the second a meeting runs its course, he takes out an index card and uses it to move quickly down pages. I saw myself how in 50 seconds, he went down the page of Yerushalmi Terumos!

This is the sereifah asher soraf Hashem, but our avodah is to take the aifer, put in mayim, and sprinkle it b’shlishi uv’shvi’i, thereby acquiring our taharah. This was the message of the Brisker Rov. We internalize in our way that today we live in a velt without Rav Chaim. May the Ribono Shel Olam be gover pirtzoseinu.