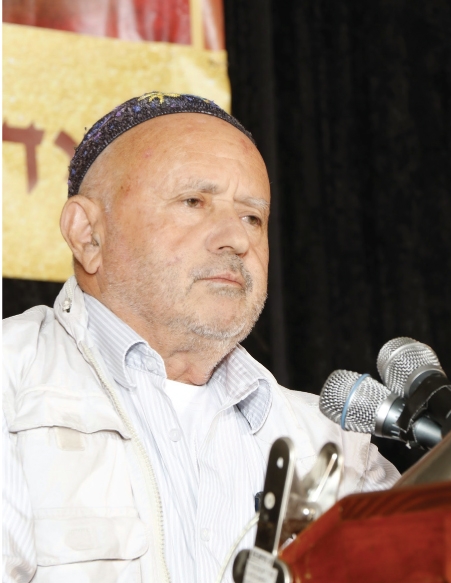 Avrohom Zilberstein is a Shmittah-observant farmer. At the recent Agudah convention, he introduced himself to Rav Shmuel Kamenetsky as â€œa poshute Yid.â€ Reb Shmuel responded, â€œThere is no such thing as a â€˜poshute Yid.' Every Yid, by definition, is very special.â€ Gedolei hador have special insight. Let me share with you the story of Avrohom Zilberstein.

Avrohom was born in Alma Ata, Kazakhstan, in 1945. His father was a Holocaust refugee from Lodz, Poland. His mother was from Odessa. Yiddish was his mama lashon. In 1948, his parents emigrated to Eretz Yisroel, where his father fought in the War of Independence.

His parents, who had lost all their relatives in the war, had given up on Torah and mitzvos. The only Jewish topic they spoke about was the Holocaust. Avrohom left home at the age of 13 and literally lived on the streets. Eventually, he joined the army and fought in the Six Day War.

Avrohom vividly recollects hearing, on his radio, Mordechai Gur, commander of the 55th paratrooper brigade, announce, “Har Habayit beyodeinu – The Temple Mount is in our hands!” When Avrohom heard those words, he went to the area of the Kosel. He was looking for it and couldn’t find it. There was no plaza in front of the Kosel as there is today. There were houses all the way to the Kosel and only a narrow path in front of it.

Avrohom asked someone where the Kosel was and was told that he was standing in front of it. He looked up as far as his eyes could see and imagined that the Kosel rose to the heavens. At that point, something came over him. Avrohom felt as if the Shechinah was coming over him. Then and there, he decided that he wanted to actually live like a Jew and not just be a Jew in name alone. Avrohom decided at that moment that from then on, he would keep Shabbos and kashrus.

Avrohom was blessed with a wonderful Yerushalmi wife and together they began building a home based on Shabbos and kashrus. He decided that he wanted to help build Eretz Yisroel. Avrohom became a farmer in the settlements and was influential in building four communities on the West Bank, the latest being Vered Yericho in the shadow of Arab-settled Yericho.

There was one particular Shabbos, however, that made a major difference in Avrohom’s life. He had put his onions out to dry before they could be ready to take to market. Almost out of nowhere, a cloudburst erupted and there was a major rainstorm. All his neighbors ran to cover their onions with plastic. Avrohom looked at his wife and they said to each other, “We have decided to keep Shabbos. Whatever happens to the onions will happen.”

On Sunday morning, Avrohom went out to the field and witnessed his neighbors crying hysterically. The temperature had risen. It was over 100 degrees Fahrenheit. All the onions lying under the plastic had become rotten in the moisture that was trapped beneath the sheathing. His onions had dried in the extreme heat and were saved. At that point, Avrohom and his wife decided that they would go full steam ahead and keep all the mitzvos hateluyos ba’aretz, including Shmittah.

After they reached that decision, Avrohom was diagnosed with lung and liver cancer. The doctors gave him three months to live. It was before a Shmittah year and Avrohom said that he wanted to at least keep his first Shmittah. With the help of Hakadosh Boruch Hu, he will now be keeping his fifth Shmittah.

It didn’t go smoothly, though. Each Shmittah, Avrohom has had a life-threatening crisis that Hashem has helped him through. One Shmittah, he caught a deadly virus and the doctors had gathered his family together. They didn’t expect him to live out the day. He did.

Another Shmittah, Avrohom had an accident with his tractor that left him inches from death. Avrohom recovered to see yet another Shmittah.

During Shmittah years, Avrohom works as a mashgiach for a kashrus agency to make sure that the Arab produce that is purchased is not really produce that was grown by Jews and then “laundered” into Arab hands. Avrohom actually caught an Arab who was dealing in millions of dollars of produce doing just that. When the Arab realized that he was caught, he tried to hand Avrohom an envelope filled with cash. Avrohom refused it and reported it to his kashrus agency and to the other kashrus agencies, so that they wouldn’t fall into the same trap. Avrohom got into his car and started driving away. The Arab had put nails on the road and Avrohom got four flat tires and the car rolled into a ditch.

Avrohom walked away with minor injuries. He was standing on the side of the road, looking at his car and smiling, when someone asked him how he can be so inconsiderate.

“The dead driver is lying in the ditch and you stand here and smile?” he was asked.

Last Shmittah, Avrohom was in such a difficult situation that he didn’t know where he would get bread for his family. The grant that he had received from Keren Hashviis was so helpful and he was able to get back on his feet. He is now supporting his children, who are learning in kollel in Mir, Chevron and Slabodka.

If you are getting the impression that this is a special Jew, then let me tell you that when his wife was offered a ticket to come to America to join her husband at the Agudah Convention, she asked that we take the money that we would have spent on her trip and give it to kollel yungeleit in Kiryat Sofer.

I considered it a special zechus to spend the three days of the Agudah Convention with this “poshute Yid.”

The author can be reached at rabbisbloom@gmail.com.