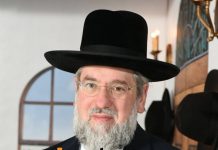 As we enter the mournful period known as “The Three Weeks,” we are reminded of another of the consequences of golus. Jews on the fringe are fighting for a sense of validity as their numbers dwindle. The media are willing accomplices.

Former prisoner of Zion and Jewish hero Natan Sharansky retired from his position atop the Israeli Jewish Agency, which claims that its mission is to “do all we can to ensure that every Jewish person feels an unbreakable bond to one another and to Israel no matter where they are in the world, so that they can continue to play their critical role in our ongoing Jewish story.” I’m not sure what that means exactly, but it sounds good and attracts many millions of government and philanthropic dollars spent on spreading the Zionist message to world Jewry and do-good projects in Israel. None of it trickles down to our community. After all, the agency sees part of its mission to be encouraging religious pluralism “for the strength of Israeli democracy and for the richness of [Israelis’] own Jewish identities.”

While Conservative and Reform are losing 75% of their members to assimilation and apathy, this vaunted group makes believe that fighting to bring them to Israel will enhance the Jewish lives of Israelis. While leaders of those groups readily admit that there is little to no Jewish continuity in their perversion of the Jewish religion, somehow bringing them to Israel will help Israelis.

Rabbi Clifford Librach, a retired Reform rabbi, recently wrote in Tablet that “there is no serious common ideology” or “guiding principles” that bind a ‘movement’ called ‘Reform Judaism.’ It is, in Arnold Jacob Wolf’s famous truculent prose, ‘a pension plan in search of an ideology.’” Who are we to argue?

“After 40 years in the vineyard, I am convinced that…our flocks are non-observant. They know little of Jewish history, less of Jewish religious behavior, almost none have any comfort with Hebrew, and they are not ‘keeping a Jewish home’ – which is to say they do not light Shabbat candles or welcome Shabbat or Yom Tov with a family meal…”

There really is no shemiras hamitzvos at all, neither among Conservatives nor among Reform. There is nothing besides a rapidly eroding bloodline that makes them Jews. And once their religion has been reduced to nothing, there is nothing left.

Regrettably, that is where they are now. Temples are closing for lack of interest and children are forsaking the non-observance of their parents, seeing no need to play this game of charade. The number of Jews around the world is shrinking, as fewer people are Jewish, and many who are don’t identify as Jews. The Left sees Israel as an enemy. Most Jews know more about – and are attracted to – leftist ideology than Judaism, and thus Jews are joining with the most well-known anti-Semites to bash and condemn Israel.

With this as a background, I was upset to read in the New York Times Mr. Sharansky’s laments as he left the job.

The Times reports, “As chairman of the agency’s executive, Sharansky seemed to have negotiated an important milestone last year, granting Judaism’s Reform and Conservative movements a say in management of the Western Wall in Jerusalem and giving non-Orthodox men and women a more dignified place to worship together there.

“But when ultra-Orthodox parties threatened to bolt the government, Prime Minister Benjamin Netanyahu abandoned the deal.

“Sharansky remains angry, but also seems to make excuses for the prime minister, a longtime friend and ally… ‘As the one who is supposed to be the leader of the Jewish people, I think it was a huge mistake,’” he says.

The article states that Sharansky believes that “Israelis know that world Jewry is its most reliable ally against delegitimization,” and American Jews have learned that without a connection to Israel, “their grandchildren would not be Jewish.”

What Sharansky is admitting, without saying so of course, is that what keeps the offspring of Conservative and Reform Jews Jewish is not their religious affiliation, not their association with like-minded co-religionists and clergy, but rather some type of association with Israel. But apparently, despite his conclusion, he is so in the tank of the Conservative-Reform swamp that, as per theTimes report, he says that “‘pluralism,’ the development of more liberal strains of Judaism beyond Orthodox, was a necessary strategy for surviving as Jews. Currently, secular Israelis, who face no threat of assimilation, see pluralism as a shortcut to the loss of Jewish identity.’”

In other words, in order for Judaism to survive in the United States, it was necessary for people to leave fidelity to Torah, halacha and mesorah and join movements that have no real ideology and which have proven to be little more than an exit door from Judaism.

How in the world can that be “a necessary strategy for surviving as Jews?” Yet, he has the temerity to say that these bankrupt ideologies must be imported to Israel so that Jews there do not lose their Jewish identity. This from the same person who says that the only thing that keeps the children of Conservative and Reform Jewish is “a connection to Israel.”

The arguments not only make no sense, but they contradict each other. And to think that the American federations send $100 million annually to the Jewish Agency. For what?

You’ll say that Sharansky is out. A new guy has been selected to replace him and maybe he will take a serious look at Jewish identity and continuity and see what to do about it.

In a stab in the back of Prime Minister Netanyahu, Isaac Herzog, a failed opposition leader who formerly ran against Netanyahu and the ruling Likud party and lost, was chosen to lead the agency, which dishes out tens of millions of dollars in its misguided mission.

Initially, perhaps there was room for hope. In an interview after his selection, the new chairman said that on a visit to America, he “encountered something that I called an actual mageifah. I saw my friends’ children married or coupled with non-Jewish partners… And we are talking about millions. And then I said there must be a campaign, a solution.”

Herzog said it the way it is. There is a real mageifah of millions of Jews marrying out of the faith and being lost forever to the Jewish people. He was slammed for his statement of truth.

Merely two days later, he walked back his statement and claimed that those who vilified him “distorted the meaning and intention of what I said. A Jew is a Jew is a Jew, no matter which stream he belongs to, if he wears a skullcap or not.”

Apparently, it is a given that Jews who belong to streams other than Orthodoxy not only don’t wear yarmulkas, but also intermarry, and that practice is accepted and should not be spoken about negatively in proper company.

In fact, he said that when he termed intermarriage a mageifah, he “didn’t mean it in any negative terms.”

It is these groups that have the nerve to seek acceptance in Israel as legitimate practitioners of Judaism. Their ideology has nothing in common with halacha and Torah. Their religion is a farce, their practice non-existent. Their numbers are crumbling and their membership is dwindling, yet Israel should recognize them as legitimate Jews who can convert gentiles to Judaism and establish temples that wean people from worship and religious practice?

It makes no sense. It shows how far we have fallen. We have lost tens of millions of Jews to their fiction and we are losing more every day.

The golus has led to shikchas haTorah and shikchas Yahadus. What are we doing about it? What are we doing to strengthen the observance of Torah in our communities and those that surround us? We can blame the tinokos shenishbu, but that doesn’t mean that we are blameless for not trying to show them the light and beauty they were robbed of. People we know can make mistakes and its upon us to rectify them.

The Shela says that “rabim heishiv mei’avon, he returned many from sin,” refers to the act he undertook to stop the ongoing licentious behavior with the daughters of Moav.

The emes in “Toras emes hoysah befihu, the Torah of truth was in his mouth,” refers to strengthening Yiddishkeit, says the Shela, for Pinchos did not only strengthen his own observance, but chastised the masses and influenced them to repent.

He says that there was no ish emunah at the time who would leave the confines of his home and enter the public arenas to engage in activities that would cause people to stop sinning. That is what brought about the churban that we mourn until this day (see also Shabbos 119b).

Rashi (Bamidbar 25:11) states that the reason the posuk traces the lineage of Pinchos to Aharon is because the shevotim mocked him and said that he killed the nosi of a shevet and his grandfather fattened calves for avodah zorah. Therefore, the posuk states that he was a grandson of Aharon, insinuating that the act he performed was akin to those performed by Aharon, who was a man of peace and virtue, and who brought man closer to Hashem.

Just as Aharon performed chesed and worked to bring shalom to the Jewish people, so did Pinchos, who the posuk says was repaid for his brave act with the eternal bris of shalom.

To earn redemption, we need people like Pinchos to reach out to other Jews and educate them and help them give up doing aveiros.

We need not be embarrassed to properly right someone who has acted improperly.

Lovingly setting people straight will make the world a better place, strengthen Yiddishkeit, and help bring about the geulah.