The Rabbinic Error of Open Orthodoxy 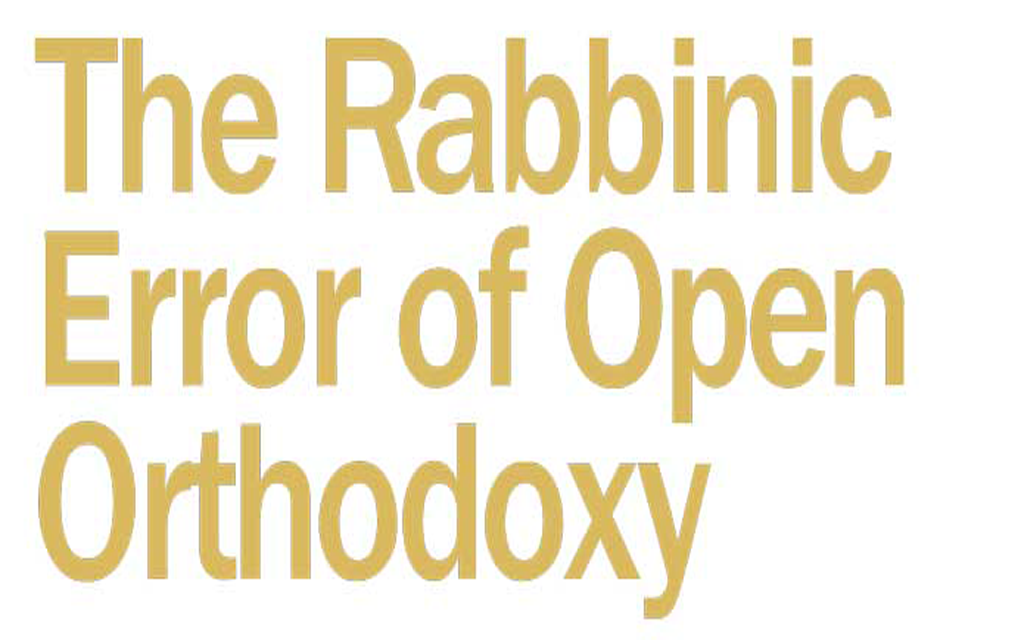 I have had the zechus to be a rov for close to four decades, boruch Hashem. Last week, a number of events and issues forced me to consider more carefully than ever aspects of my chosen profession.

On Motzoei Shabbos, I had the pleasure of speaking at the hachtarah – what we used to call an installation – of a young rov in our community, Rav Doniel Gladstein. Along with my esteemed colleagues, Rav Noach Isaac Oelbaum and Rav Moshe Tuvia Lieff, and Rav Gladstein’s rosh yeshiva, Rav Akiva Grunblatt, I attempted to define the roles of a rabbi and his congregation in our time.

Welcoming a young wonderful talmid chochom into the community indeed gave birth to thought and feelings about rabbonus in our time and what has gone horribly wrong in Modern Orthodoxy today. Celebrating with a rov who danced with his centenarian grandfather, a rov in Pittsburgh for seven decades, snatched miraculously from the claws of the crematorium, gave me tremendous chizuk, even as I mourned quietly over what has happened to a once glorious rabbinate in America. Please allow me to share a few thoughts about the state of rabbonus today.

There is a well-known Gemara (Kesubos 105b) about the role of popularity in a successful rabbonus. Abaye taught: “[If you notice] a young rabbi who is very popular with his congregation, it is not because he is so great a leader. It is because he does not [sufficiently] chastise them concerning spiritual matters.” Rav Yosef Engel zt”l, in his sefer Gilyonei Hashas, notes that Abaye learned this approach to the rabbinate from his own rebbi, Rabbah. Noticing that his rebbi was not overly popular with his constituents, Abaye was worried about who would eulogize his rebbi when that time eventually arrived. Rabbah answered, seemingly resigned to his lonely state, “It will be enough for me that you and Rabbah bar Rav Chanan [will speak].” Clearly, both Rabbah and his student Abaye understood the rabbinate as a position that required the kind of toughness that is often antithetical to popularity.

And yet, today, every rov wants to be liked, and in fact needs to be liked. We read in last week’s sedra, Va’eira, that sometimes Moshe is mentioned first and at other times Aharon is given precedence. Rashi comments that this teaches us that “they are equal.” Many meforshim ask how this can be, since the Torah testifies that there was no one as great as Moshe Rabbeinu. Of the many answers given, the relevant one here is that each of them had a unique task that they fulfilled perfectly. Moshe Rabbeinu taught us Torah, was the embodiment of yiras Shomayim (Devorim 34:12), and, as Rabbah and Abaye later learned, could not be concerned with their personal popularity. However, Aharon needed to be loved by Klal Yisroel totally and absolutely, since he represented unconditional love and acceptance (see Rambam, Avos 1:12).

A rov must be able to somehow balance these two seemingly disparate personae, never compromising on principles and yet never withholding his personal love and affection for each individual. It is noteworthy that very early on, our first glimpse of Moshe Rabbeinu is of the man who is moved by the plight of his brothers and goes out to help them as best as he can (Shemos 2:11 with Rashi). A bit later in his development as the leader par excellence, he is chosen by Hashem because he has compassion for a lost sheep and is therefore worthy of becoming the shepherd of Klal Yisroel (Shemos Rabbah 2:2). Moshe Rabbeinu is suffused with love for every Jew, but he will never compromise one iota of the Torah for any one of them, for the Torah itself is greater than any and even all of us.

Rav Moshe Shternbuch (Teshuvos Vehanhagos 2:722) shares a harsh but pragmatic portrait of rabbis whose sole purpose is to please their membership: “The rabbis here [in South Africa] see their main job as speaking at funerals, weddings and bar mitzvahs, sometimes even in the shul on Shabbos and Yom Tov. This is not the classic image of the rov in Klal Yisroel…and therefore they do not deserve the ancient kavod haTorah due to rabbonim… Their congregations do not even want a talmid chochom, only a rabbi who will be acceptable to his baalei batim, for this is why he was hired.”

Interestingly, at the hachtarah of Rabbi Gladstein, a number of the speakers evoked a famous letter (Igros No.132) from my rebbi, Rav Yitzchok Hutner zt”l. Writing to a newly-minted young rov, he told him of the traditional village clock in every town square. Placed high up in a central location, everyone could see the correct time from anywhere in the neighborhood. However, my rebbi explained to the tzurbah meirabbonon, the deeper reason the clock was placed high up above the crowds was so that no one could tamper with the clock’s official time. Imagine, he wrote, if the clock was set low enough for anyone to reach its mechanism. Everyone would adjust the village clock to his own wristwatch, as wrong as it might be. “You, too,” the rosh yeshiva exhorted, “must be the village clock, high above the fads and fashions of the moment, true to the teachings of eternity and the ages.”

I believe that this is one of the places where the leaders of so-called Open Orthodoxy themselves went off the derech. The authorities of this movement tend to be rabbis, not philosophers or theologians. I believe that part of their fatal mistake in taking modern Orthodoxy down a lemming’s road of self-destructive Judaism is their misperception of the role of the rabbinate. They have somehow convinced themselves that their professional role requires them to make everyone happy. To utilize the Aharon and Moshe model, without chas veshalom dignifying their perversions of Torah as stemming from either one, we can conclude that they thought that they can be all Aharon without a bit of Moshe Rabbeinu. It is fine for Aharon to allow the woman to spit in his eye to save her shalom bayis, but it is not acceptable to spit in the eye of the Torah to make some radicalized liberalized women, or any other group, happy.

The Torah, as it was handed down to us from each generation, is a sacred immutable eternal entity, which cannot be altered even to make someone happy, feel more equal or vindicated. One of the gravest dangers of this movement is its insatiable need to placate, satisfy and validate everyone. Just as every parent knows that sometimes you must simply say “no,” so must a religious leader realize that always saying “yes” is neither compassionate nor benevolent. It is merely destructive.

Writing about a certain group of well-meaning rabbis, in another area entirely, Rav Moshe Feinstein zt”l (Yoreh Deah II, 116) concludes that “those who believe they are performing a kindness (mischasdim) are actually following the dictates of the yeitzer hara, their evil inclination.”

This is a time for both rabbonim and baalei batim to strongly condemn any deviation from our holy Torah. We must urge rabbonim and other leaders not to cater or pander and to listen to one voice only, the eternal sound of Sinai, as handed down for over 3,300 years of glory.