Be Honest: It Just Isn’t Orthodox 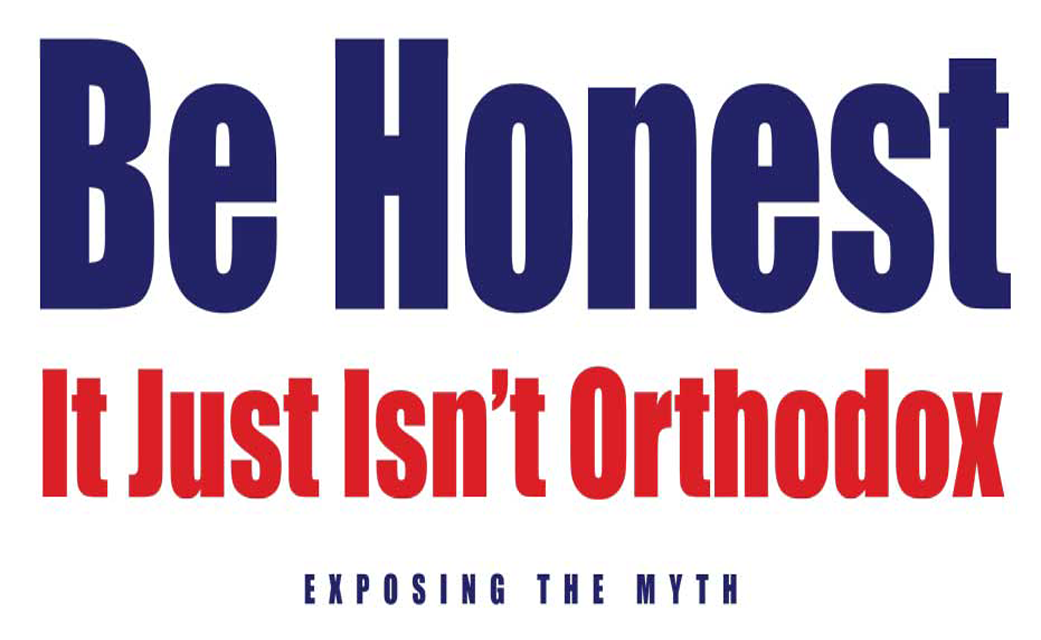 “When you can’t defend on the substance due to your weak position, beat around the bush and make personal attacks.” This is the credo of those who have been waging a firestorm against me for last week’s Yated article, The Inevitable Moment of Truth for Modern Orthodoxy, in which it was posited that the sincere elements of Modern Orthodoxy will eventually identify to a large degree with the “Traditional Orthodox” communities, while the left fringe of Modern Orthodoxy, or those who are members of the Open Orthodox movement, will in due course assimilate into non-Orthodoxy.

Rather than engage in discourse on the merits, Open Orthodox leaders and bloggers have done their best to smear and denigrate me in every way, for they have little to argue in terms of substance, when it comes down to it. I really do not mind the assaults, as they demonstrate the weakness of the position that the assailants are purportedly defending.

A few people have coupled their personal attacks with alleged substantive argument. Such people’s approach is best and most colorfully represented in a new Times of Israel blog piece, Modern Orthodoxy’s Right: In Search of a Message, by Daniel B. Schwartz, a divorce attorney from Rockland County.

“It is Open Orthodoxy alone that addresses some of the fundamental challenges to the entire Modern Orthodox enterprise that have arisen in the past twenty or so years. In response to each and every Open Orthodox attempt to deal with those questions, issues like how to create Halachikly (sic) permitted ritual opportunities for ever eager and educated women, or how to render a seemingly ultra-conservative Orthodoxy relevant and meaningful to an increasingly liberal youth, or how to address the challenges to faith posed by critical Bible scholarship (which is ever more and more easy to access online), Gordimer’s reply is always to simply denigrate the motivations of those questioners, to brand them religious miscreants and to predict schism as a result of their alleged turn to heterodoxy.”

Let’s look at this more carefully. Open Orthodoxy should be credited, argues Schwartz, for trying to create permissible ritual opportunities for women, attempting to make Orthodoxy more relevant to disenchanted youth, and addressing Biblical criticism. Well, we know how Sarah Schneirer dealt with women’s involvement in Torah, how Rav Shamshon Raphael Hirsch handled the issue of Jews living in an open, secularly enlightened society, and how the Malbim, Rav Dovid Zvi Hoffmann and others discounted Biblical criticism. One gets the impression from Schwartz that Open Orthodoxy is following in this glorious tradition.

But the ugly truth is that Open Orthodoxy has taken the opposite route of embracing rather than dispelling or overcoming that which is antithetical to Torah. Open Orthodox leadership is responsible for feminizing prayer services, ordaining female “rabbis,” supporting and celebrating “non-traditional” marital unions, and accepting interpretations of Bible critics that deny Torah l’Moshe miSinai in a literal sense and the historicity of Tanach. Open Orthodoxy has not protected and perpetuated Torah in the face of modern challenges. On the contrary, it has compromised, diluted and rejected Torah principles in favor of anti-Torah values.

But Schwartz and those he represents know this well. They are not fools and they have an agenda, as evidenced by the latter section of Schwartz’s essay:

“Whether it was Hirschian Neo-Orthodoxy, Hungarian ultra-Orthodoxy, American Modern Orthodoxy or the American Kollel phenomenon, Jews serious about preserving Halacha and maintaining its central role in Jewish life and destiny always developed new and innovative ways to render Halacha and Jewish belief resonant, meaningful and satisfying to the Halachikly (sic) observant. And each of those developments was accompanied by articulated statements of principles, philosophies of Jewish life, that both explained the new structure and packed it with religious meaning. Sometimes, as was the case with Modern and Neo-Orthodoxy, some level of compromise with western values and culture was needed. In other times and places and for other Jews, a more uncompromising self-segregating approach was the solution. Both models have their basis in classic Jewish sources. But it was the successful innovations in Judaism of those various schools of thought that enabled Halachik (sic) praxis to weather the storms of Enlightenment, Emancipation and the pull to assimilate… Tradition once again needs to be reshaped…  Be it ultra or modern styles, Orthodoxy needs to be re-formed into a Judaism that resonates and gives meaning, lest it be deemed an irrelevant anachronism by the present generation of Modern Orthodox Jews…”

Schwartz believes that each varied cultural manifestation of Orthodox Judaism was based on a reform and possibly a compromise with authentic or original Judaism. Our mesorah, of course, rejects this notion outright. For sure, new casings and external modes and emphases were at times introduced in an effort to maintain the integrity of Torah, but the actual substance was preserved. None of the heads of the various “movements” in Orthodoxy would have subscribed to Schwartz’s assertions that “tradition once again needs to be reshaped” or “Orthodoxy needs to be re-formed.” Abraham Geiger championed “re-form” of Judaism. Rav Shamshon Raphael Hirsch, Rav Azriel Hildesheimer, and all others who guided communities of Torah Jewry through new challenges and met these challenges with a new (or renewed) derech (path) retained and did not reform. They retained the substance and values of Torah and the meticulous adherence to its laws. Can the same be said of Open Orthodoxy? Has it retained or reformed?

“Gordimer’s tactics do achieve one purpose; they squelch free and open debate… Gordimer, via his denigration of Open Orthodoxy and its leadership, refuses to engage in free and open debate, to compete in the free marketplace of ideas… For Gordimer, one is either “in or out,” a true believer or a heretic. But it is Gordimer’s worldview that is rendered out. Why should an outsider take him seriously, when he takes no one, other than himself and those who think as he does, seriously?”

Mr. Schwartz, I am the last person to refuse to engage in debate. But real debate is a discussion of the merits. Open Orthodoxy has failed miserably on the merits, diluting and compromising in countless core areas of Torah. Rather than attack those who point out this truism, perhaps it is due time to reconsider what has been wrought.

Judaism can only be given meaning to the disaffected and disenfranchised if the original, authentic article is presented. The packaging, language and delivery must be appealing and inviting, but kabbolas ol Malchus Shomayim, subservience to the halachic and hashkafic/belief mandates of Torah, and zero compromise with forces that are antithetical to Torah are absolute requirements. These principles animatedly and powerfully spring forth in total and compelling clarity from every sentence of the majestic writings of Rav Hirsch. Do you come away from the writings of Open Orthodox leadership with the same sense of commitment to tradition and unwavering deference to halachah and hashkafah?

The most recent “dvar Torah” that was issued by Yeshivat Maharat leadership – not by a student, but by one of Open Orthodoxy’s most respected leaders, on the website of its “rabbinical” school for women, begins:

“In last week’s exploration of parshat Shemot, Moshe emerged as a strong spiritual leader willing to teach God about who God needs to be for the Jewish people. In this week’s parsha, VaEra, he continues audaciously to do the same…”