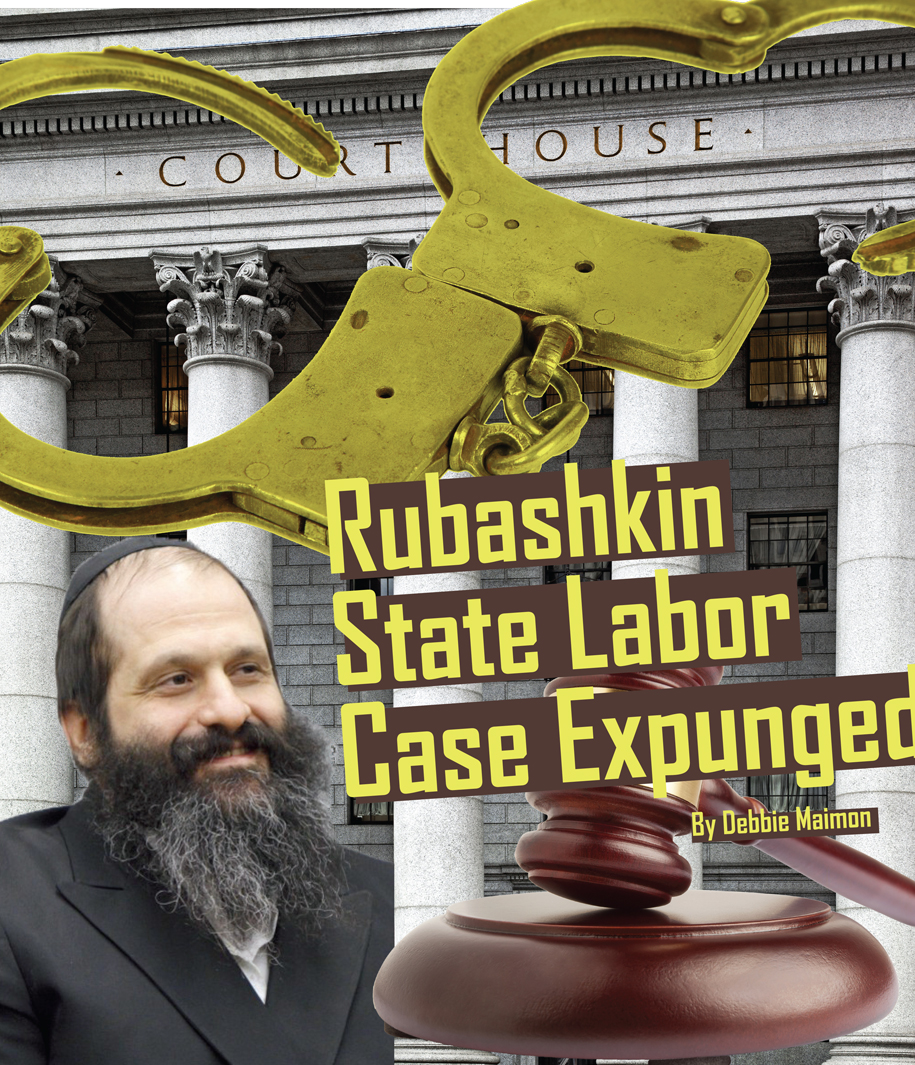 In a remarkable but unreported event in an Iowa courthouse a few weeks ago, a judge expunged from the court record Sholom Rubashkin’s entire labor case, including all documents and trial proceedings connected with “The State of Iowa vs. Sholom M. Rubashkin.”

The judge was implementing a new state law that grants a former defendant who was found innocent at trial, or for whom all charges were dropped or dismissed, full erasure of his criminal record. Such an act signals recognition that the case was without foundation, should not be used in any way against the former accused and essentially, should never have been brought.

It’s the closest thing to an apology one can expect from the government for putting someone through the financial and psychological ordeal of a criminal prosecution.

Sholom Rubashkin was one of the first individuals to see his state case wiped clean thanks to this new law. What an extraordinary sequel to a sensationalized criminal prosecution, in which he was initially slated to stand trial for a staggering 9311 counts of violating child labor laws.

Government officials spent two years investigating and preparing the case, spending vast sums of money, amassing thousands of files and preparing dozens of witnesses. Now even the initial indictment can no longer be found on any public database. The entire saga has been expunged. Who could have envisioned the massive affair would later be erased by a one-page court order?

Had anyone suggested such a scenario during the painful, bleak period when Sholom was surrounded by enemies anticipating his conviction on thousands of labor counts, he would have been laughed at.

As many will recall, a smear campaign waged against AgriProcessors by labor unions, the Forward newspaper and various unscrupulous elements had trashed its reputation well before the trial commenced. Sholom Rubashkin’s name in many circles had come to be linked with the evils of worker abuse and immigrant exploitation.

Of course, when the 9311 labor violations were abruptly dropped to 83 on the eve of the trial, observers began to suspect something artificial about the massively inflated indictment. But the propaganda had already poisoned public opinion. Victory for the prosecution was thought to be a slam dunk.

One remembers how the government at great expense had flown in witnesses from Guatemala and other countries where, as undocumented workers at AgriProcessors, they had been deported after the raid. Now they were promised rich incentives to return – including a coveted U-visa for themselves and their families – in exchange for their cooperation with the government.

All they had to do was give testimony against their former employer, describing to a jury how they were hired as minors at the meat-packing plant and were mistreated and exploited.

To the government’s chagrin, the trial did not go according to script. Despite extensive prepping by a Spanish translator, the witnesses’ narratives were plagued with inconsistencies. Many witnesses fumbled their way through their testimonies, frequently retreating into “I don’t know” or “I don’t remember” under cross-examination. Their collective testimonies failed to sway the jury.

The actual charges against Sholom were that he knowingly hired underage minors and exposed them to dangerous machinery and working conditions. At trial, the prosecution also aired a host of additional allegations about foul play at AgriProcessors including extortion, withholding employees’ wages and not providing workers with safety gear.

The witnesses from Guatemala each testified to having been underage when they were hired at the meat-packing plant. Yet, as cross-examination proceeded, most admitted they had lied about their age to get a job, raising doubts about their overall reliability. A baffled jury pondered the many unknowns. Had the witness truly lied about his age as he claimed? Was he really a minor at the time he was hired? If so, how was Sholom Rubashkin at fault for hiring him?

If these former employees were telling the truth about their ages, why could the government not produce birth certificates, passports or other form of documentation to corroborate their statements?

Or perhaps the witnesses, with their eyes on the promised U-visa, were lying to the jury now about having lied then, when applying for a job? If so, how could their testimony about anything related to AgriProcessors be trusted?

Puncturing the many lies and myths about AgriProcessors that had gained traction posed a challenge for defense attorneys Mark Weinhardt and Montgomery Brown. But their diligent cross-examination and talented ‘lawyering,’ in a courtroom presided over by the even-handed Judge Nathan Callahan, slowly turned the tide in the courtroom.

Weinhardt and Brown not only shredded the credibility of the government’s witnesses, they laid bare the lack of foundation to claims of unsafe work conditions, physical abuse, lack of safety equipment and exposure to poisonous chemicals at the plant.

One by one, the allegations raised by the government collapsed under scrutiny.

Defense witnesses included plant managers; an immigration attorney; a former Postville city councilman; Agri’s former rav hamachshir; various individuals who had been given comprehensive tours of the plant, and a professional interpreter who had access to Postville’s immigrant community.

Management personnel testified that regulations about not hiring minors were strictly enforced at AgriProcessors. One officer explained that the plant had so many applicants, they turned away dozens each week; the applicant pool was so abundant there was no need for underage workers.

In addition, he said, the risks involved in employing minors made it thoroughly impractical to do so. Their performance would be inferior, causing productivity to suffer. An injured minor would not qualify for insurance. His being discovered could result in the plant losing its insurance. There was nothing to be gained and much to lose in hiring underage workers.

Rabbi Weissmandl used the opportunity on the witness stand to explain the origin, in his view, of the widespread prejudice against AgriProcessors and Sholom Rubashkin. He cited the relentless smear campaign of PETA, aided by UFCW union leaders, liberal Jewish activists at the Forward, and Conservative Jews pushing a new kind of “kosher” certification based on arbitrary ethical standards.

“Each group alone was ruthless, with non-stop incitement and harassment…Together they were unstoppable,” he said.

Slowly, throughout many hours of testimony, a more truthful picture emerged about the workers and about conditions at AgriProcessors. Defense witnesses established that safety training and safety equipment at the plant were a foremost priority. Over $100,000 a year was spent on safety equipment, protective safeguards and training, one manager testified.

Another manager, Chaim Abrams, testified that the record of workplace injuries at AgriProcessors fell below the national average at slaughterhouses; after a five-year period, insurance premiums paid by AgriProcessors for its workers so exceeded the amount of accident claims filed, the company received a refund. As all insiders know, this is extremely rare in the slaughterhouse industry, the manager said.

LABOR DEPT KEPT AGRIPROCESSORS IN THE DARK ABOUT MINORS

One of the most troubling disclosures that emerged from the defense testimony concerned an April 2008 onsite inspection of the plant by the Labor Department. Mary Funk, an immigration attorney from Des Moines, testified that following that inspection, AgriProcessors was sent a subpoena asking for over 100 personnel files.

Aware that the inspection team had included a Hispanic woman trained as a “facial expert,” Funk surmised that underage workers may have been discovered. Funk sent a letter to Sheridan Lucht, one of the labor officials, asking her to specify the names of any employees she believed to be minors, so that AgriProcessors could fire them.

“She wouldn’t give us any names,” testified Funk in court. She went on to describe how she repeatedly pressed Lucht at the Labor Department for the names of the suspected minors and was continually rebuffed.

“She said the investigation was ongoing.”

“So labor [officials] let minors remain there for many weeks until the raid?

“I don’t know what they did. I only know we were not told who these minors were – if in fact they were minors.

“Is it fair to say Ms. Lucht was playing games by withholding this information?

“All I know is she did not give us the names.”

WHY DIDN’T LABOR RUSH TO TAKE THE ‘MINORS’ OUT OF DANGER?

Apparently in no particular hurry even after discovering “minors” in the plant’s work force, the Labor Department scheduled a June 2008 onsite inspection of documents at AgriProcessors to complete its investigation. That inspection never took place due to the May ICE raid, at which point all documents and records were seized by ICE officials.

One can’t help but ask the obvious question: Is it not bizarre that government officials took no action to stop minors from working long hours around supposedly poisonous chemicals and dangerous machinery?

Shouldn’t they have been concerned enough about child-laborers to respond to the attorney’s repeated inquiries? After all, would the state of Iowa be prepared to spend close to half a million dollars to prosecute Sholom Rubashkin if they did not consider child-labor laws of paramount importance?

One cannot avoid the implication that if in fact minors had been discovered, these were being used as pawns in a more important cause —and that is why officials stonewalled on the names.

Here was a chance to stage a high-profile case in the name of a humanitarian cause. Here was an opportunity to advance careers by bringing down Sholom Rubashkin, who by this time had been so demonized in the public mind, he would be a very soft target. A cinch to convict.

THREE WORDS THAT
CAPTURE A UNIVERSE

As is well-known, the jury found Sholom Rubashkin innocent of all charges. The public was astounded by his sweeping acquittal. But for those who followed the trial carefully, there was no mystery.

The phenomenon of Sholom’s acquittal boiled down to three words that capture one of the cornerstones of a democracy: A fair trial. A trial at which the constitutional right of the accused to defend himself is respected and judge and jury both seek the truth.

Since the case has been expunged and there no longer exists any official record of the trial, memory must replace electronic records in preserving an awe-inspiring narrative of a stunning turnaround… when the unexpected and impossible became reality in Sholom Rubashkin’s life.

May the same come true regarding his current Motions to vacate his federal trial and be granted his freedom.

[More to follow next week on these two Motions which have just received a ruling from Judge Reade.]